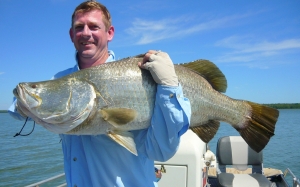 The barra is internationally recognised as one of the world’s great sportfish and is prolific in the Northern Territory.

They are aggressive predators and terrific fighters, as any angler who experiences their strong runs, high jumps, and rod-bending lunges can attest to. In the Territory, it’s not uncommon to catch 10kg-plus barra and there are plenty of fish weighing 20kg or more landed each year. The Holy Grail for anglers is the capture of a barramundi measuring more than one metre: a “metrey”.

One major attraction of the barramundi is the variety of locations where it can be found and the different fishing techniques that can be used to catch it. Barra frequent inshore rocks and headlands, coastal estuaries and creeks, big rivers and inland billabongs. They can be caught using a wide range of lures – casting and trolling – and a variety of baits can be successful. The barra is also a fantastic opponent for the fly fisher.

Northern Territory barra are available for anglers all year round in the right locations and using the right fishing techniques.