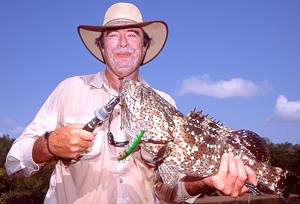 There are several cod species but the estuary cod and the Queensland groper are more commonly encountered by anglers. These fish can grow to well over 200kg. Smaller fish are very common in the estuaries and can also be found around reefs and other structure well offshore.

Larger fish make their home in deeper cover such as underwater caverns, shipwrecks and beneath wharves. Larger specimens of both these fish are now rightly considered as major natural assets and are protected by law.