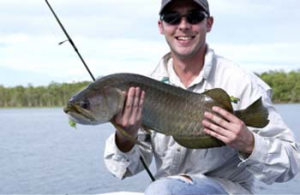 Saratoga are beautifully-coloured, high-jumping fish found in freshwater rivers, creeks and, more commonly, in the billabongs where they tend to shelter under lilies and other water plants waiting for a passing meal.

Saratoga are ferocious predators and will aggressively attack surface lures and flies. They can grow to about 5kg but are usually caught at weights between 1 and 2kg. A brood of juvenile saratoga will often retreat into their mother’s mouth when approached by a predator.